When Was The Tabernacle Built?

This is the seventh post in a multi-part series on when Brother Branham became involved with Pentecostal churches.

Anyone who has visited the Branham Tabernacle over the last several years has probably seen this marker on the side of the building which indicates the building was dedicated in 1933: 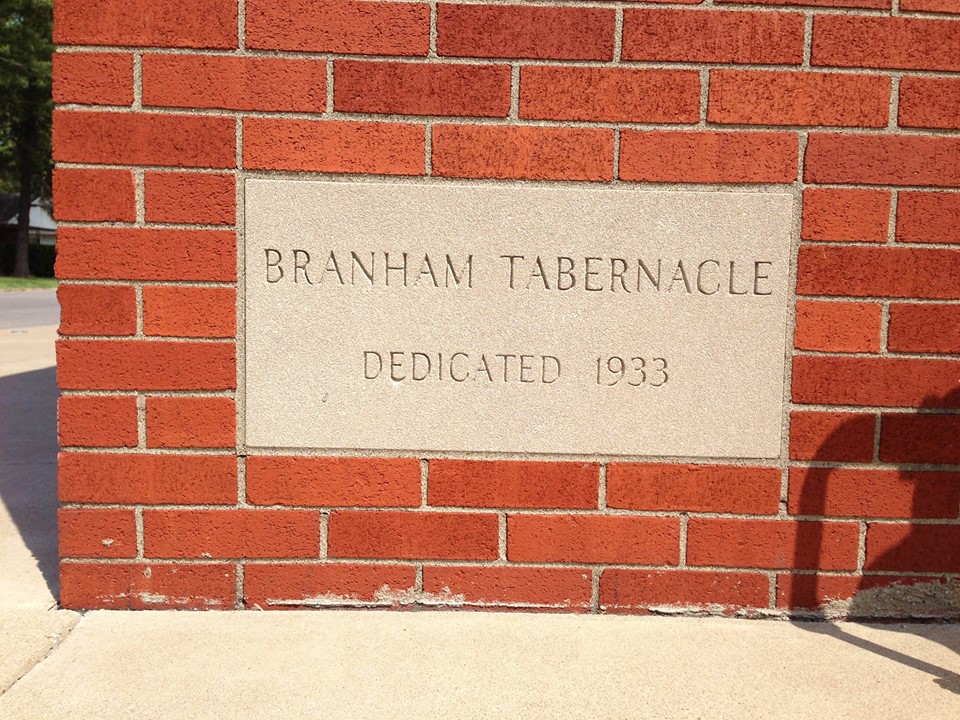 Throughout his ministry, Brother Branham states he laid the cornerstone of the tabernacle around March of 1933. However, in our previous post on the 1933 baptism we included quotes from Brother Branham which indicate he was still attending Roy Davis’ church when he held his first revival. This first meeting is when he says he baptized 500 people in the Ohio river at the foot of Spring Street in June of 1933.

If you look at a photo of the Branham Tabernacle from the 1930s, it’s obvious that this marker was not part of the original construction. Notice the 1930s image shows the building does not have any brick veneer: 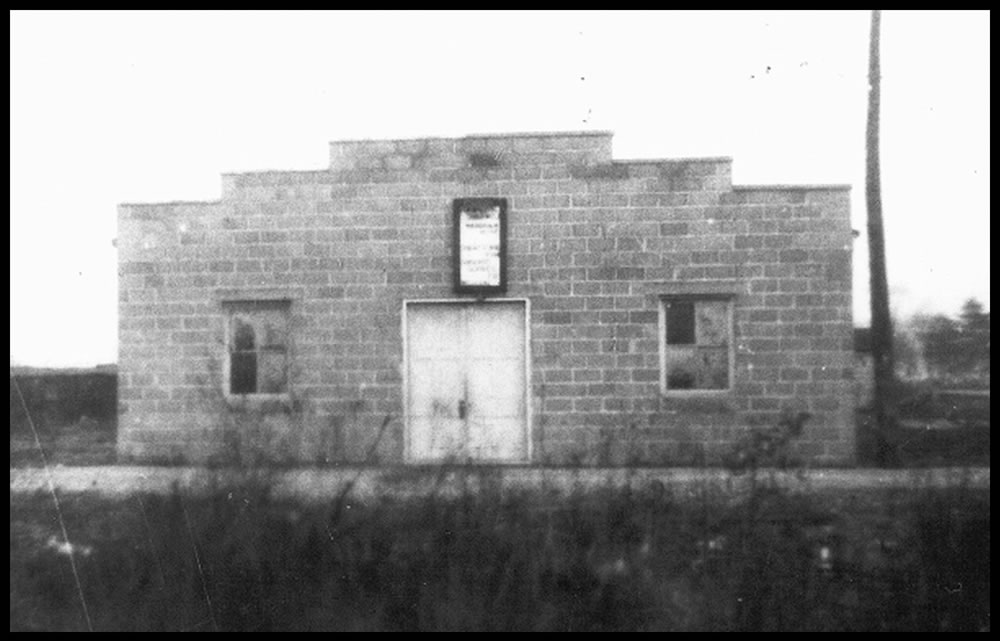 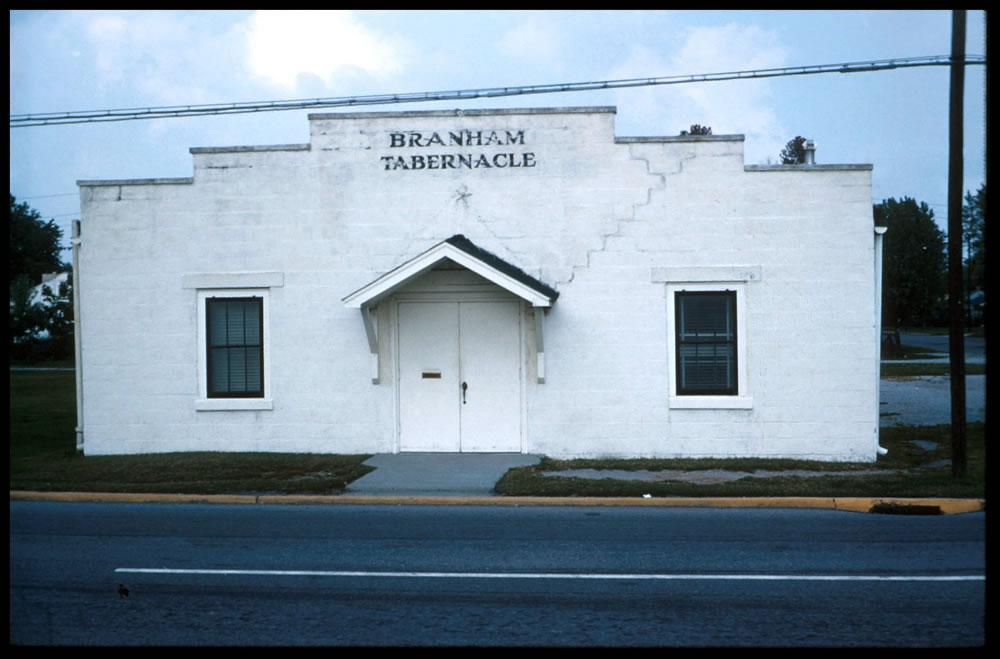 The tabernacle was remodeled and expanded in the 1960s. This is the first time we see a brick veneer on the building.

When Brother Branham preached A Trial in Tucson, Arizona on April 27, 1964 he tells us he took over Roy Davis’ church when Dr. Davis moved away from Jeffersonville:

And I had a baptismal service down on the river, on 1933, on the middle of June, about sixteenth or eighteenth of June. And standing out there, it had been so hot, for weeks. Hadn’t had no rain for two or three weeks, and the country was burning up, nearly. And there was, I guess, around seven or eight thousand people on the bank. And I walked out in the water, with my seventeenth candidate, to baptize. And when I baptized, started to baptize, I said, “As I baptize thee with water, may the Lord Jesus…”

Notice Brother Branham indicated he was the assistant pastor of Roy Davis’ church when the church burned down.

Now, when I laid that cornerstone there that morning, I never felt that I’d ever be a pastor. It wasn’t in my callings, at the beginning. And my first call was to be on the field of evangelism. That was many years ago. And started off, over here in a tent, just across the street.

And I remember when Brother Roy Davis, down there, and his church burnt down. That bunch of people was just like scattered sheep without a shepherd, had no place to go.

And Mr. Hibstenberg was Chief of Police then, and he called me down there. He said to me, “We’re here to help you.” Said, “I’m Catholic, myself, but,” said, “them people,” said, “they don’t probably have the clothes.” It was during the time of the depression. Said, “They go to other churches and they feel out of place, and they’re good people. I know many of them.” He said, “Billy, if you wanting to start a church,” he said, “I want you to know that we’re behind you in anything we can do to help you.” And I thanked him for it.

We had a tag day. First, we prayed and asked the Lord. And people come to me and wanted to build a church, so could have a place to go. And we decided this place, and one night along this time, or a little further here, in a pile of horseweeds right along in here, and water in this ditch, and just had been like a dump, like. Well, the Lord spoke to me definitely and said, “Build it right here.” Not a penny of money, and among us we had about–about eighty cents or a dollar. And that’s, course, you would laugh at that now, but, brother, that was some money then.

When some neighbor cook a pot of beans, and yet the neighbor hadn’t had nothing for two or three days, come over and eat a few of them, that was hard times. Lot of the young fellows never seen that, but that was hard going. I seen the time that you could pass through this church a collection plate, two times, or three, and get thirty cents out of a place packed full, and beg for it. It would… You’d probably got thirty cents, and had a good offering. See? It’s really rough going.

And we had nothing to build with, yet the–the desire of the people was to build a church, so we could have a place to go. Cause, in them days… The Message, well, you think It’s badly thought of now. You ought to have knowed It then, when there’s nobody, and then of this water baptism in the Name of Jesus Christ, and the–the blessings and things that we believe in and stand for.

So upon my heart I made a promise to God, that we would stay here and build the tabernacle. The morning we laid the cornerstone, He met me over there in a vision, about eight o’clock that morning, when I was setting there, watching out across, the sun coming up, just about this time of year. And He had told me, after He had met me down there on the river, with That, when the Angel of the Lord appeared in that Light. I seen It in the distance. It looked like a star. And It come right down over where I was, and them notable Words were spoken. And so, then, I purposed then to get a place for the people to worship in.

Notice in the quote above Brother Branham states, “And started off, over here in a tent, just across the street”. The newspaper reported that Brother Branham held his first tent meeting on the corner of 8th and Pratt. Today, this lot is the other end of the Branham Tabernacle’s parking lot. 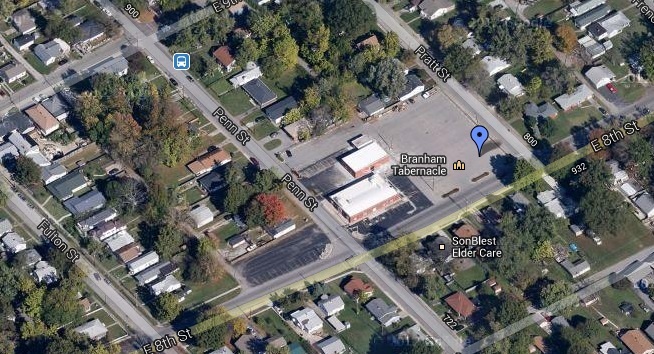 According to the quotes above, the tabernacle was not built until Roy Davis’ church burned down and Brother Branham took over the congregation. In our next post, we’ll present documented evidence related to the ownership of Roy Davis’ church at 328 Watt Street.