What The Newspapers Said About the 1933 Baptism

This is the sixth post in a multi-part series on when Brother Branham became involved with Pentecostal churches.

In our last post, we shared a long list of quotes regarding the 1933 baptism. In these quotes, Brother Branham makes a number of key points about this event:

Remember, in particular, that Brother Branham was baptizing his first converts as he stated while preaching The Pillar Of Fire in Jonesboro, Arkansas on May 9, 1953:

And He… When I was–I was a young Baptist preacher baptizing my first converts, five hundred of them down on the river, my first revival… I had about three thousand attend at the revival. And my education was so poor, till my girlfriend read the Bible while I preached.

On May 6, 1933 Roy Davis began to advertise an upcoming tent revival in the Jeffersonville Evening News:

The upcoming tent revival was advertised again on May 27, 1933: 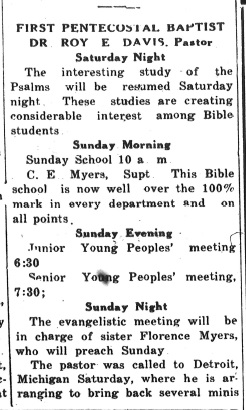 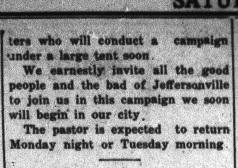 “The Papers Packed The Article Of It”

The tent revival is not mentioned again in the church’s advertisements, so it likely happened some time shortly after May 27, 1933. Just a few days later, the June 2nd edition of the Jeffersonville Evening News packed this article on the front page: 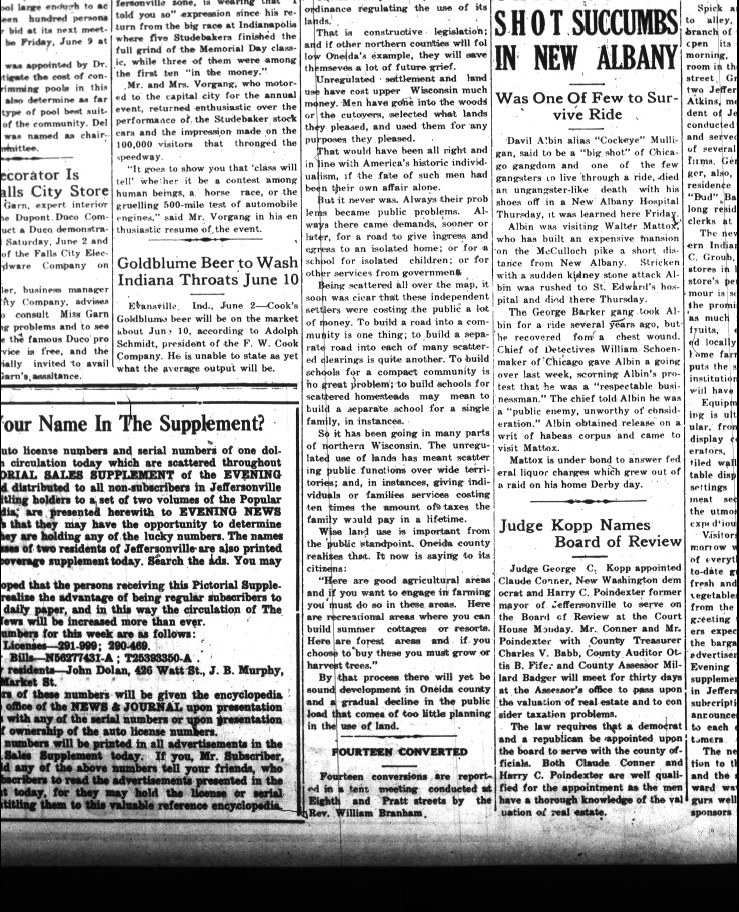 Perhaps, like us, you nearly missed this article. Here’s an enlarged image of the article which is tucked down on the bottom of the front page: 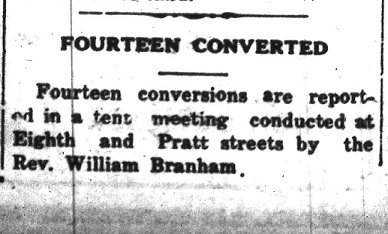 Amongst the quotes we shared yesterday Brother Branham makes it clear that he was still in the Baptist church (Roy Davis’) when he held his first revival. From The Angel Of The Covenant preached in Phoenix, Arizona on March 1, 1954:

It was seen on the river there when I was just a boy, baptizing my first group in the Baptist church: Five hundred, one afternoon, at the foot of Spring Street in Jeffersonville. The newspapers packed an article of it: A Mystic Light Appears Over Local Baptist Minister While Baptizing At The River .

In this quote from A Trial preached in Louisville, Mississippi on April 5, 1964 Brother Branham mentions discussing the light with his pastor:

I went down then to baptize a bunch of people on the river. When I was baptizing there, where about five thousand people standing on the bank; right in the middle of the day, two o’clock in the afternoon; hot, they hadn’t had a rain for a week or two; and standing on the bank. Here come that Pillar of Fire whirling out of the air, coming down where I was standing, and the Voice saying, “As John the Baptist was sent, and to forerun the first coming of Christ, your Message will forerun the Second Coming of Christ.”

The newspapers packed it, and it swept into Canada on the Associated Press, around the world, “A local minister, Baptist minister, baptizing , and,” said, “a mystic Light appears over him.” The very One that they caught the picture of here, and done it in Germany and–and everywhere. And it’s done.

My pastor said to me, he said, “Billy, what kind of a dream did you have? Why, you know you didn’t see…”

I said, “There were hundreds standing there, witnessed It.”

The newspaper article from June 2, 1933 is the first mention in the newspaper of Brother Branham being involved in a tent meeting. This service appears to be the tent revival sponsored by his pastor, Roy Davis. We’ve searched the Jeffersonville Evening News for 1933-1935 and there is no mention of a mysterious light or a huge crowd at the river for a baptismal service being held by Brother Branham. Other people have been searching for this article for years, and to date, such an article has never been produced. In this sleepy river town, this would have been a huge story. Just like sixteen men falling to their deaths in a bridge construction accident, this huge baptismal service with a mysterious light over a young baptist preacher would most definitely be front page news.