Rising Pulpits During The Flood

While searching for evidence of the Municipal Bridge Vision, we ran across the following article in the Jeffersonville Evening News from March 8, 1937:

At first we thought that perhaps the reporter had made a mistake and had reported the name of the wrong church. But, on further examination, the Tabernacle had a dirt floor at that time. In addition, a short time later we stumbled across the following article from the Jeffersonville Evening News on March 22, 1937: 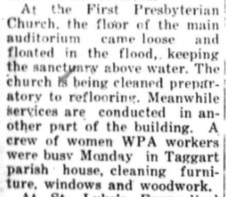 In Brother Branham’s Own Words

Brother Branham tells the story of the pulpit in the Branham Tabernacle rising to the ceiling during the 1937 flood. Visitors to Voice of God Recordings can see this pulpit and will hear about how Brother Branham’s Bible was on the pulpit, how the pulpit rose to the ceiling during the flood, and how it came to rest in almost the same spot with the Bible open to Mathew 24:35 when the flood waters receded. This event is discussed in the Easter 2009 Catch The Vision on pages 14-15.

Below are some accounts of Brother Branham discussing this event.

We come into this little, old tabernacle, you strangers. Well, this could be a glamorous place here on the corner, you don’t realize that, that people has wanted to build this place and make it. But this is the way we like it. See, this is the way we like it. Old seats we were setting on there, was the–the old original seats out of the tabernacle here, went through the flood and floated up. My Bible laying open like that on the pulpit. It son It, “I the Lord hath planted it. I’ll water it day and night lest some shall pluck it from My hand.” How we rowed across the top of it with a skiff, here. And she come right back down, the seats moving right back to their place. All they had to do was scrub it out and go on. See? See? So this is just the way we like it, where it’s a common people, common place, and a wonderful Lord. Amen.

During the time of the flood here, in 1937, this little ol’ church, when the mud floors and so forth that was in it, we could ride over the top of it here in a–in a rowboat. The floods went up. And, well, that night when I had preached the Gospel and had left my Bible laying open on the pulpit when I had went home; predicting that flood would come, I said, “I seen him measure twenty-two feet over Spring Street down here.”

Old Brother Jim Wiseheart and them laughed at me. You remember that, Brother George? I said… He–he said, “Oh, Billy, in ‘84 it only was about six inches on Spring Street.”

I said, “I seen a man come down from the skies, and take a measure stick and stick it there on Spring Street, said twenty-two feet.”

Ask them how many feet was over Spring Street. Twenty-two feet to the–the inch! Exactly.

“Heavens and earth will pass away, but My Word shall never pass away.”

How that Bible float in that salty water for two years without even soiling the words on It! God’s Word’s are true. Amen.

I remember after that, old Brother Jim Wiseheart was so satisfied with that, every time he’d get a pain on his arm… He got some kind of wrong with him when he got about seventy-five years old, he got rheumatism. The pain would go to hurting here, he’d run get the Bible, and open it up, lay it on there, another pain down here. I come up there one day and he had so many Bibles over him I couldn’t see Brother Jim, he just had Bibles all over him! He said, “It’s God’s promise!” That’s it.

“Heavens and earth shall pass away, but My Word shall never pass away.”

During the time of the flood, I was preaching here one night, left my Bible. The ‘37 flood came overnight almost, as it swept through the Tabernacle, picked up this same pulpit, raised it right up; there was no other ceiling in here then, and set it right against the ceiling. The Word being under the pulpit, instead of it sinking it floated, took it right up to the ceiling. And I rowed all around over here in a boat. And then when the waters went down, it came down and was laying right here at the same chapter I was reading out of, after the flood. “Heavens and earth will pass away, but My Word shall not.” That’s right. He’s wonderful. Isn’t He?

“If I tell the Truth, God’s obligated to me, to witness that It is the Truth.”