Former believers have criticized Brother Branham’s stories about his boxing career. They say there is no evidence of Brother Branham boxing, and also question whether or not Six Second Smith actually existed.

From The Greatest Battle Ever Fought preached in Jeffersonville, IN on March 3, 1962:

And you know what? You know why I’m doing this? I’ll tell you. The other day I had a dream. I wasn’t going to tell it, but it’s just on my mind. I might as well do it, after the Lord has give me interpretations. I dreamed that I was fixing to cross a great river, for mission work. And now, first, I was up there with my wife… And how many ever knowed George Smith, Six-second Smith, here in town? George Smith, his boy is on the police force here. He, poor George, is an alcoholic now. But he was one of the best fighters. He was the one give me my training, ‘fore even went to the Y.M.C.A. and anywhere. He used to train us. And he was fast, real fast. He was only a welterweight, for hundred-forty-five pound. And he trained me. And used to stand up there, and he could take his fist, like that, and hit me right in the stomach, raise me up against the wall, see, but, and it wouldn’t bother me. He just had me trained, there wasn’t nothing but just training.

From Wisdom Versus Faith preached in Jeffersonville, In on April 1, 1962:

And I used to box. And there was a fellow named here in this city. The poor fellow drinks very bad now. One of his boys is on the police force. Smith, George Smith, they called him, “Six-second Smith.” He went to training me for boxing, when we had… ‘fore the Golden Gloves started. We was out here at the government. And in that, why, he was the roughest person I ever seen. He’d just hit me, and I’d just go winding through the air. And I come back. I said, “You don’t have to be so rough about it. See?” I said, “You knock the breath out of me.” He said, “I tell you, Billy,” said, “no matter how well trained you are, and how much athletic experience you have, and how strong you are, for your size, or anything like that,” said, “a lick stops the blood when hits like that.” [Brother Branham claps his hands once–Ed.] And said, “You might hate me now, but when you get up there in the ring, yourself,” said, “you’ll appreciate it.” Said, “Your body builds up that, to come back quick. If you get hit, you’ll just fall over, and you’ll lay there and take a count. But if your body is built and can stand the licks,” said, “then, when you hit it, hard lick hits you,” said, “then when you, you come back quick,” said, “back to your feet again. Get knocked out of the ring, jump back in.” He had just got through knocking me plumb out of the ring. So he said, “You have to just do that. You see?” And he liked to killed me. He was about thirty or forty pounds heavier than I was. And he could… He was a fighter and I was just a student, so he was almost killing me. He said, “But you’ll appreciate that when you get in the ring.” I found out that was the truth.

From Presuming preached in Cleveland, TN on April 8, 1962:

When I first started training for boxing, before I got in professional fighting, there used to be a trainer, they called him “Six-second Smith.” The first professional fight he had, he whipped the man in six seconds. And when I started training, that man liked to killed me. He’d knock me plumb out of the ring and everything else. And I was skipping ropes, and running seven, eight miles every day, and taking all the training.

And I said, “Six, why do you have to do me that way?” See? I said, “You just knock the breath out of me. Man, I went plumb over four ropes, come right out of there in–in amongst them chairs, and liked to broke my back on them.”

He laughed, said, “That’ll do you good.”

And he said, “Look, Billy. I don’t care how physically fit you are; your body’s got to be able to stand that, come back right quick. If you take a hard punch.” said, “if your body’s not used to coming back, you’ll lay there and take the count.” He said, “But if your–your body’s used to taking it, then coming back…” Every time you hit it, that shocks the blood, runs it back to the heart.

There was a 1923 silent movie titled Six Second Smith. Some people believe that Brother Branham used this fictional character from this movie and made the story up.

As it turns out, Six Second Smith was a real person. We ran across some newspaper articles related to him while researching the Municipal Bridge Vision. From the Jeffersonville Evening News on September 1, 1928:

Later in 1928 there was a lot of anticipation around a fight between Six Second Smith and Howard McLain: 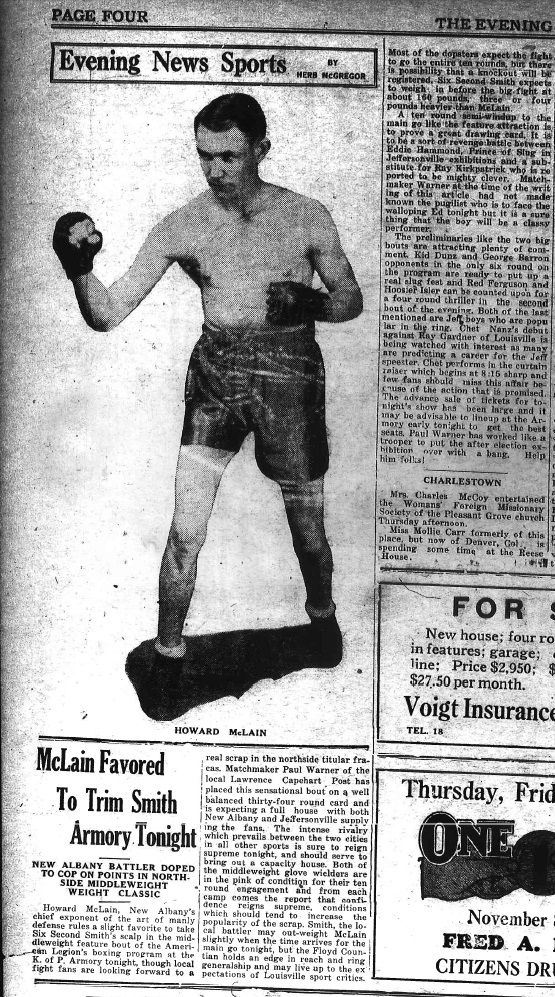 Unfortunately, Six Second Smith lost this bout and the next day, the papers gave him a hard time about being knocked out by McLain who was a scientist from New Albany:

Full page scans of these two articles can be found here and here.

The BoxRec website includes an incomplete profile of a boxer named Six Second Smith from Louisville, KY. We know this record is not complete because the fights listed above in the newspaper are not included in this record. BoxRec does not have a record for Brother Branham, but given that Six Second Smith’s record is not complete, we don’t believe we can accept this lack of evidence as proof that Brother Branham never boxed.

While we have yet to find any direct evidence of Brother Branham boxing, we have discovered that Six Second Smith was a real boxer in the Jeffersonville area.