The Modjeski and Masters Report

This is the eighth post in a multi-part series on the Municipal Bridge Vision.

Early on in our research we learned of the existence of an official engineering report on the building of the Municipal Bridge. This report was delivered to the Louisville Bridge Commission in 1930 and, as you’ll see below, it contains many details about the bridge’s construction that are of interest to our search. The report itself is forty-seven pages long and, in addition, there are a number of large format fold-out engineering drawings included.

If you'd like to examine this document in detail for yourself, we've posted a PDF of the sections of the engineers' report discussed in this post. If you are using Adobe Acrobat, you can rotate the document to make it easier to read.

The document is broken into three distinct sections:

The first several pages of the engineers’ report is a brief history of the process of securing funding and the necessary legal work required to make way for the construction of the bridge.

Starting on page nine, the engineers begin discussing the construction of the substructure of the bridge. The substructure is basically the piers and does not include the steel superstructure. The timeline presented in this section will be important later. The Vang Construction Company was supposed to complete the five northernmost piers by December 1, 1928 and the remainder by May 1, 1929. They completed all piers by December 1, 1928, a full five months ahead of schedule.

This section of the document gives us detailed information about the problems associated with constructing Pier II that were caused by pumps used by a nearby ice making plant. This required a change in the original plans for constructing Pier II. A special caisson had to be designed for this pier and it had a unique system for being sunk. The engineers note that:

This method of sinking was carried out very successfully without a single accident or interruption to the work and greatly expedited the construction of this pier.

The authors go into a great deal of detail about each pier. The engineers tell us about some minor delays because of quarries not delivering stone on time. Finally, there is a discussion about the granite used in the construction of the bridge and we learn about the precision involved in the building of the piers: each piece of granite was planed to within 1/32 of an inch of a true plane.

This section is short, it covers half of page 16 and half of page 17. This is 1/7 the length of the discussion about the substructure construction. Most of this section is dedicated to the American Bridge Company’s new “guy derrick system of erection” which was developed because of delays acquiring land and demolishing buildings where the bridge approaches would eventually be constructed. This new method enabled the bridge to be built from the center of the river out to the bank. The guy derrick method of construction was new. The report contains some very important details about it.

Study the pictures below. What do you notice? 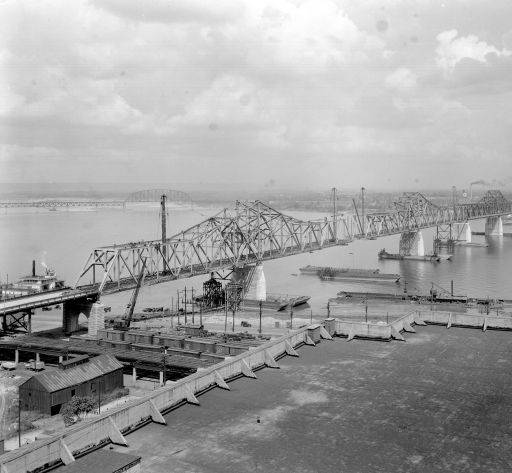 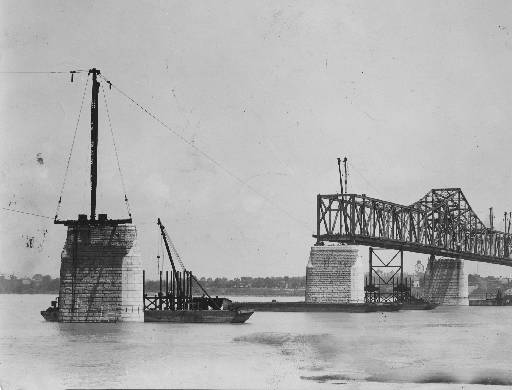 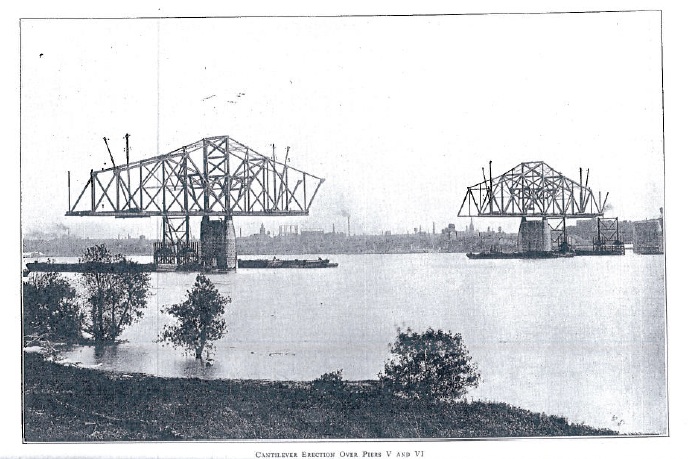 (Image from Modjeski and Masters Report)

The power plants used to run the bridge erection equipment had to be in a barge below the equipment. Notice that all of the construction photos you see from this phase of construction have many barges in the water right under where they are working. This system used lighter equipment for erection so they didn’t have to oversize the bridge sections to handle the additional stresses that normally occur during the erection process. Finally, since the power plant was not on the bridge, all of this additional weight was also eliminated.

The erection of the steel superstructure would have been the most likely time for a bridge collapse to occur. A new construction method was used and this would have been the time for an accident to happen. However, the report does not include any accounts of any failures of this new system, the collapse of a span, or any deaths that would be attributed to this phase of construction. On the contrary, it contains this very important paragraph:

The erection work was started in December, 1928. This system was new and there were many details that had to be improved and developed as the work progressed, and this delayed somewhat the progress made on the first half of the bridge which was not completed until July 1, 1929, requiring a total of eight months’ time. However, the work progressed much more rapidly on the second half of the structure and it was completed in approximately four months’ time. This system of erection greatly facilitated the work and enabled the American Bridge Company to complete their contract well in advance of the date of completion.

Compare this section of the report with the previous section dealing with the caissons and piers. In that section the engineers took ample space to discuss problems and how they addressed them, however, in this section there are no real issues that are discussed, just a few adjustments to the new process that enabled them to move more quickly on the second half and complete “their contract well in advance of the date of completion.”. No accidents or major issues are discussed. In this case, the “lack of evidence” is a clear indication that there simply were no major issues.

This very brief section (3 paragraphs) gives the highlights of the construction of the bridge approaches. The section notes that:

This short section (2 paragraphs) is basically a description of the administration building and toll houses. It ends with the following statement:

There were no unusual difficulties in the construction of this part of the work and it was all completed within the scheduled time.

Construction of the Bridge Lighting System

This is the final section of the Subjects area of the report. It’s also only 2 paragraphs long and ends with the following statement:

The contract for the lighting system for the entire project was signed with the F.A. Clegg Company of Louisville on March 27, 1929, and the work was completed within the scheduled time.

The engineer’s narrative gives a detailed account of the challenges with the construction of the bridge’s substructure (piers) but indicates that the remainder of the construction was completed normally. There are no mentions of collapsing cranes or spans, and no records of any major failures or catastrophic accidents. This bridge was erected with less stress on the structure than there would have been using a more traditional bridge construction process. There was less weight on the superstructure during construction than normal, and barges were under the bridge sections that were being worked on. Safety is mentioned in the report.

In our next post, we’ll complete our examination of the remainder of this document.

Update:
It's occurred to us since posting this that some people may be starting to draw conclusions about the Municipal Bridge vision. It's our intention to be very factual and balanced in our presentation of the information we have discovered. It is not our intent to destroy people's faith or destroy Brother Branham's credibility. We urge you not to form a final opinion on this matter until all of the documentation we have has been presented and you've looked into the matter for yourself. There's definitely more to come. Please be patient with us.

It takes an incredible amount of time, effort, and energy to carefully publish each of these posts. We're moving as quickly as we can.