The History of Roy Davis' Church

This is the eighth post in a multi-part series on when Brother Branham became involved with Pentecostal churches.

In our last post we started to explore when the Branham Tabernacle was built. Brother Branham indicates that he took over the congregation from Roy Davis’ First Pentecostal Baptist church after the church burnt down and Dr. Davis returned to Texas. We set out to determine when Dr. Davis started his church in Jeffersonville and when it burned down to establish a timeline for these events.

In a previous post we presented the New Albany and Jeffersonville City Directory and provided copies of Roy Davis’ entries. The city directory does not include Roy Davis or the First Pentecostal Baptist church in the 1929-1930 edition. Dr. Davis and his church do appear in the 1931-1932 edition as well as the 1933-1934 edition. By the time the 1935-1936 edition was published, Dr. Davis and his church were no longer listed.

Here’s the entry for the Pentecostal Baptist Church for 1931-1932. Notice the church is located at 328 Watt Street. 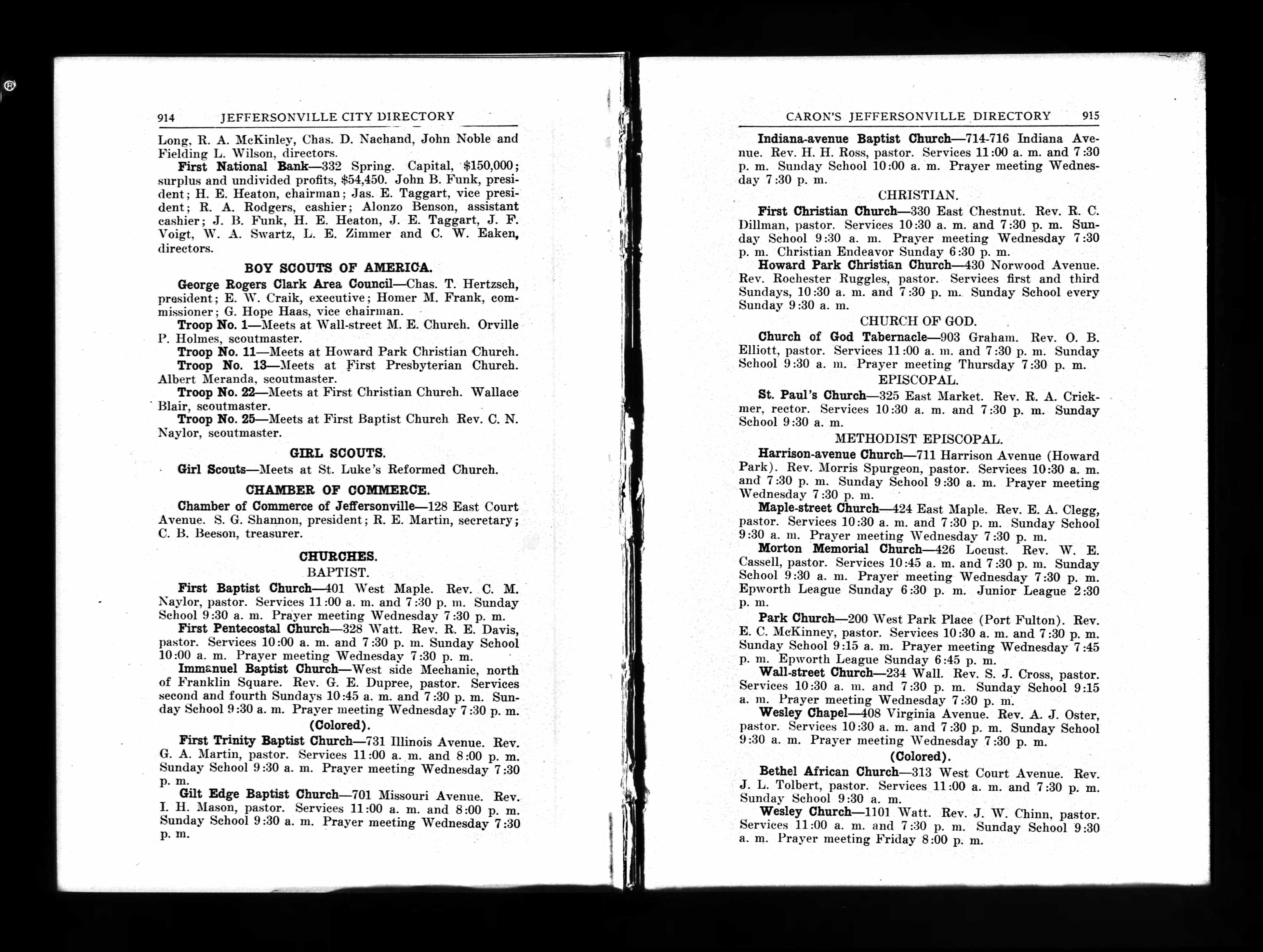 The city directory tells us that Roy Davis arrived in Jeffersonville sometime between 1929-1931 and was no longer listed by the time the city directory was published in 1935. In order to pin down a more exact timeline, we consulted property records as well as newspaper archives.

This is the Clark County Courthouse in Jeffersonville, Indiana: 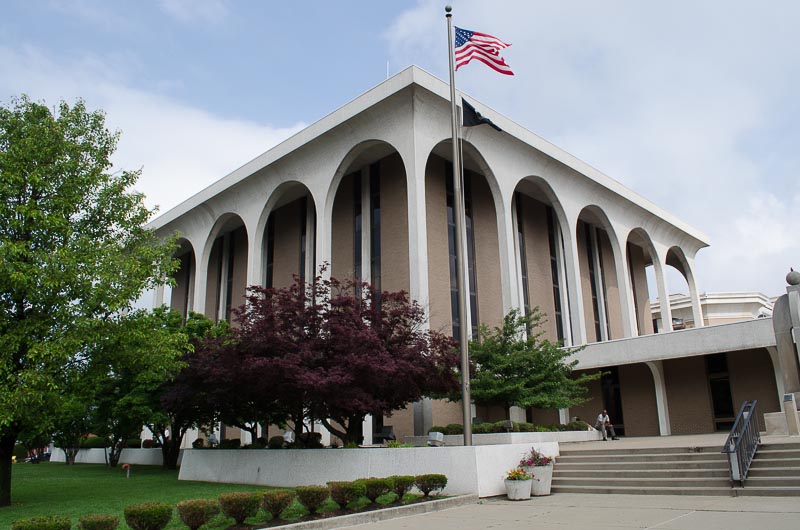 The lot and building on 328 Watt Street were purchased by Roy E. Davis, Henry Steedley, Clarence E. Myers, and William Adler, Trustees of the First Pentecostal Baptist Church on December 16, 1930. The property was purchased from the First Church of The Nazarene. Here’s a copy of the deed record from the Clark County Deed Grantee Book 125, page 319. Notice that the deed specifically states there is a house of worship situated on the property. 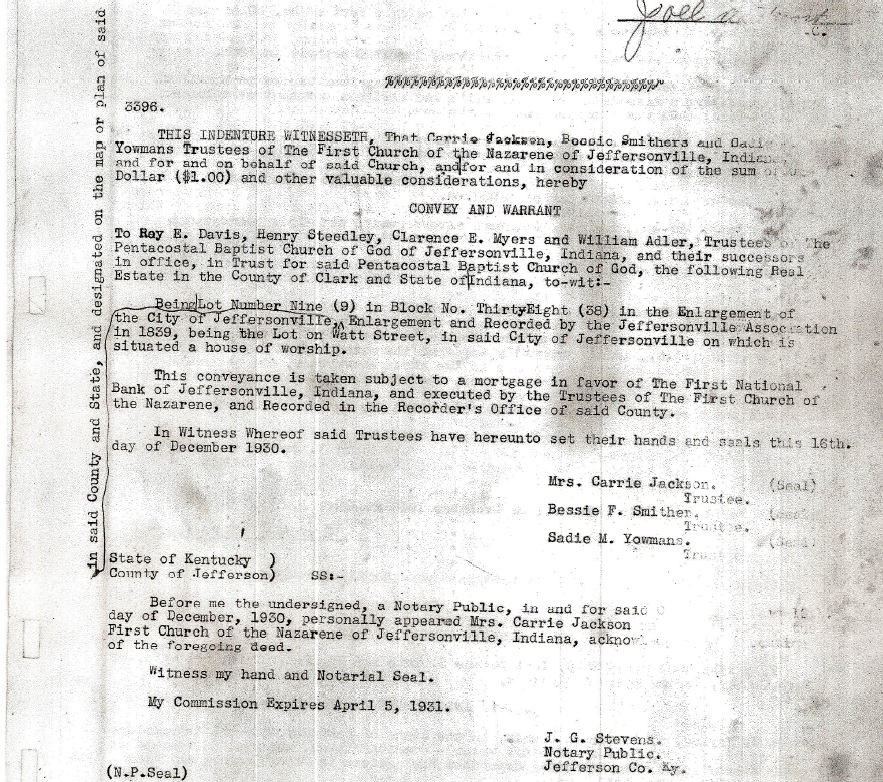 Don’t be confused by this statement in the deed: “…and for and in consideration of the sum of one Dollar ($1.00) and other valuable considerations”. This statement does not mean the property was sold for $1.00. This is a legal term commonly used in contract law. Remember, this is just the deed, not the sales contract between the two parties. The deed does record a mortgage against the property owned by the First National Bank of Jeffersonviile. Even in 1930 people didn’t take out morgages for $1.00. If you’re interested, you can read more about this legal phrasing over on wikipedia.

According to the Jeffersonville Evening News, the church celebrated their three year anniversary on December 20, 1933: 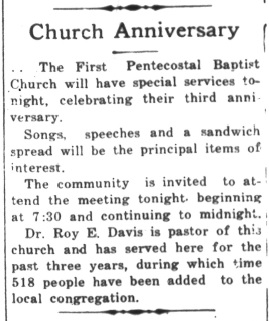 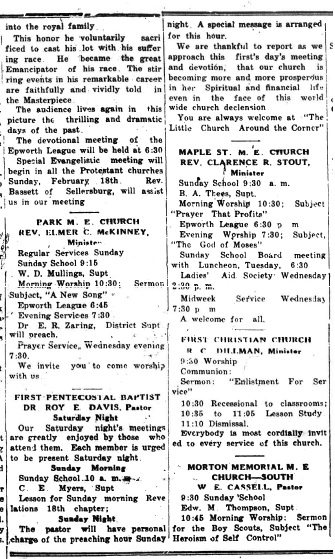 This deed has the same legal description as the previous one from 1930, with one exception. This deed states that the church is no longer on the property: “..being the lot on Watt Street, in said City of Jeffersonville, upon which was formerly situated a house of Worship.”

Remember Brother Branham stated Roy Davis’ church burned down while Brother Branham was the assistant pastor. The quote below is from A Trial preached in Tucson, Arizona on April 27, 1964:

Something definitely happened to Roy Davis’ church between February 10 and May 10 of 1934. Based on Brother Branham’s accounts above, he was still the assistant pastor of Roy Davis’ Pentecostal Baptist church in February, 1934. This asserts that construction on the Branham Tabernacle did not start until at least February, 1934. It’s unclear how long Brother Branham remained affiliated with Davis’ church after this event, both from the historic record and from Brother Branham’s personal accounts. In our next post, we’ll examine newspaper archives and property records related to when the Branham Tabernacle was started.