Did It Happen During the Flood?

This is the fourteenth post in a multi-part series on the Municipal Bridge Vision.

Was There An Accident on the Bridge During the Flood?

No. While the bridge itself stayed above water during the 1937 flood, the northern approach flooded. There was no accident on the bridge during the flood where sixteen men died, because no one was using it during the flood. It’s a little difficult to see in this picture, but if you look closely you can see the approach, along with most of Jeffersonville is under water. Keep in mind that while this was a significant, record-breaking, and devastating flood, the river was still only above flood stage for 18 days. It appears the bridge was closed for 10-15 of those days.

Was the Bridge Damaged during the Flood?

There was no major damage to the bridge during the flood. The toll houses and administration building where flooded as well as the approaches, but the bridge itself did not sustain any damage (The Great Ohio River Flood of 1937 Page 107). In historian Rick Bell’s Lousiville’s Waterfront Park the author states:

“Louisville’s infrastructure suffered punishing blows during the Great Flood. Afterwards architects inspected every building, bridge, and roadway before approving their use.” (194, emphasis ours).

In one of his other books, The Great Flood of 1937, Rick Bell indicates:

“To speed cleanup, City Division of Transportation dump truck drivers were instructed to drop their loads of debris directly into the Ohio River. Trucks drove to the middle of the Louisville Municipal Bridge (today’s George Rogers Clark Memorial Bridge) and emptied their refuse over the guard rail.” (117)

This page of the book also includes a picture of a dump truck unloading refuse into the river.

If the bridge was damaged during the flood and required major construction, it’s highly unlikely that city dump trucks would be using the bridge to dump refuse. Also, if any construction resulted in an accident where a section collapsed and sixteen men plunged into the river and drowned, it would have been impossible to do so.

As we’ve shown before, most deaths in Jeffersonville were reported on the front page of the Jeffersonville Evening News. There were no papers published from January 21, 1937 until February 20, 1937: 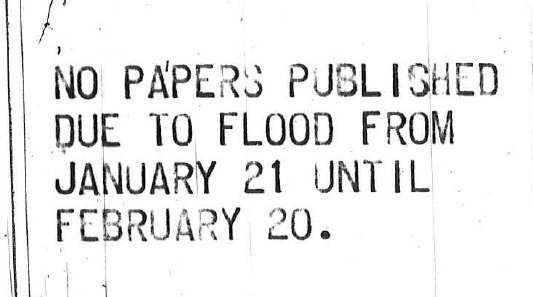 When the paper resumed, the front page led off with an article proclaiming that Jeffersonville’s death rate had stayed normal during the flood: 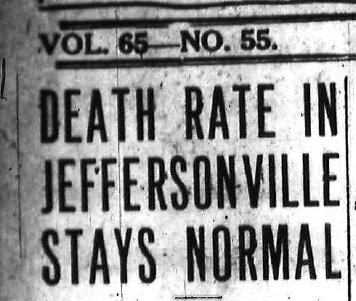 There’s no mention of sixteen deaths due to a major bridge accident.

On January 6, 1937, the Jeffersonville Evening News ran a front page story indicating that the bridge had experienced record revenues during 1936: 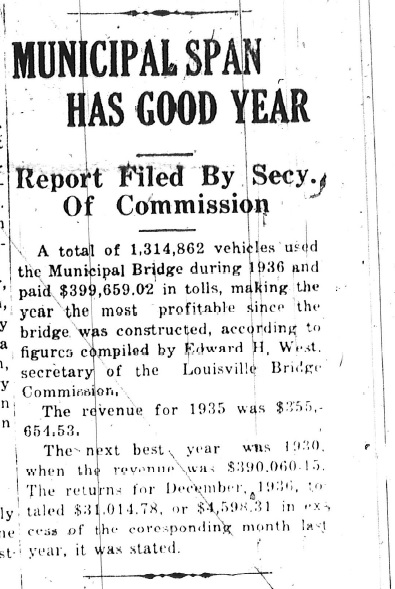 On May 4, 1937 another article appeared in the Jeffersonville Evening News recording a 9.42 percent increase in revenue for the first four months of 1937. The revenue increase appears to be the direct result of increased traffic due to lowering toll rates on the bridge. Toll rates would have been unlikely to be lowered if funds were needed to repair a bridge damaged in a major construction accident. The article notes that the bridge was closed during the flood, but does not mention any other major closings due to an accident.

On July 2, 1937 another revenue record was reported in the Jeffersonville Evening News:

Revenue continued to rise during the summer months and once again appeared on the front page on September 2, 1937: 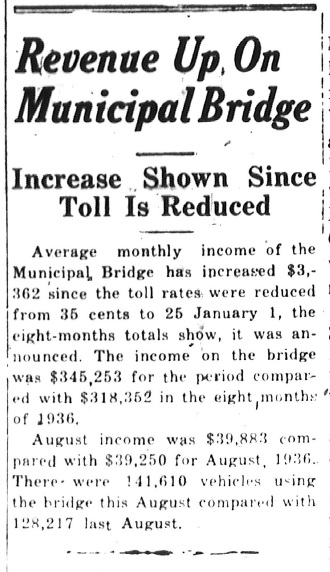 It would be impossible to make these types of financial gains during a period when a bridge span collapsed.

Other Bridge Events in 1937

On June 3, 1937 a man attempted suicide by jumping off of the Municipal Bridge. The Coast Guard Life Saving Station Lookout spotted him, dispatched a life saving skiff, and the man was rescued. Here’s how it was recorded in the Coast Guard Log:

This story was picked up by the Jeffersonville Evening News on June 4, 1937: 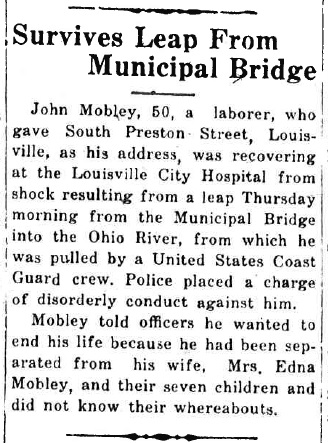 Another suicide attempt was reported on June 17. The Coast Guard Logs also include it: part 1, part 2.

On October 7, 1937 the first traffic fatality on the Municipal Bridge was reported:

There are no other articles in the Jeffersonville Evening News regarding the bridge in 1937. There are no other events in the Coast Guard Logs from 1937 that would lead us to believe that there was an accident on the Municipal Bridge where 16 men lost their lives.

There is no record of any accident occurring on the Municipal Bridge in which sixteen men fell into the river and drowned in 1937. The sources of evidence we reviewed reported reliably on many more mundane topics that surround the bridge. The Coast Guard Life Saving Station Logs include reports of 24 hour surveillance of the the area around the bridge. There is contriving evidence against this vision being fulfilled in 1937. A very strong case can be made for there being ample evidence that this event did not occur in 1936 either.