Background On The Municipal Bridge and Its Construction

This is the fourth post in a multi-part series on the Municipal Bridge Vision.

The Louisville Municipal Bridge was the first highway bridge built over the Ohio River at Louisville. Prior to its construction the primary means of crossing the river was via a ferry boat service. The K&I bridge between New Albany, Indiana and Louisville was a railroad bridge, but also had a creosoted wood decking that was used for automobiles. This was not its primary purpose, though, and it was unable to handle the traffic load as people starting buying more and more automobiles. The need for a dedicated traffic bridge between Jeffersonville and Lousville instead of the existing ferry service became obvious. The idea was first suggested in 1919 and by 1923 substantial planning was in full motion. While the need for the new bridge was clear, there was extensive debate about how to fund the construction. On one hand some believed the bridge was best funded by revenue bonds and on the other were those who believed it should be constructed as a toll bridge. In the end, the issue went to a ballot in the 1926 election cycle where voters defeated the public funding of the bridge project. A bond issue in 1927 failed to pass muster as well. In the end, the Louisville Mayor’s Municipal Bridge Commission pursued private funding for the bridge. Stranhan, Harris, and Oatis financed the roughly $5 million dollar project, but the bonds issued were not guaranteed by any government entity.

It’s important to note that the upcoming construction of the bridge and the surrounding public debate began in 1919, a full ten years before the bridge was completed. At that point, the construction of this bridge was a foregone conclusion; when it would be built and how it would be funded were the real questions. Brother Branham would have had to have the vision of the bridge prior to 1919 or it would have already been a subject of public debate.

The commision was so confident that the project would be completed that they had already commissioned Paul Cret to design the administration building and approaches as well as Modjeski and Masters to design the bridge itself all the way back in 1926, a full two years before the funding issue was resolved. Because of this, the design was able to be approved shortly after the funding was secured. The project moved forward quickly and construction began in June, 1928.

The administration buildings and pylons were designed in an art deco style, which, while common in New York and other cosmopolitan cities was considered quite a novelty in the Louisville area. In fact, during the construction newspaper editors fawned over the sheer beauty of the approaches saying in a July 20, 1929 article that

“every detail of the new traffic structure is to reek with beauty in a setting especially designed by those who caught the vision of the completed structure and dared to outline plans for their realization.”

“cast a glance east to this bridge neighbor and ponder how these two men of renown brought a contemporary interpretation to their late-1920s bridge over the Ohio.”

Further, the author goes on to say,

“Let’s hope, as well, that any new spans completed over the Ohio in the near future achieve some of the same excellence in form and function.”

The bridge design is unique in the Louisville area. It would be difficult to confuse it with another bridge.

The construction of the bridge presented some unique challenges. There were delays in acquiring land and demolishing buildings to make way for the bridge approaches. As a result, a new methodology was used to erect the bridge. Instead of building from the shore out and spanning across the river, the bridge was built from the middle of the river out to the banks. This is an important distinction as we examine Brother Branham’s accounts of the vision. This technique developed by the American Bridge Company was new and created additional interest in the construction.

This bridge involved some very novel work by two of the most famous people involved with bridge construction in the modern era. Modjeski and Masters would go on to design the Huey Long Bridge in New Orleans and the San Francisco-Oakland Bay Bridge, among many others. Construction of the bridge began in June 1928 and the bridge opened on October 31, 1929 at a final cost of $4,821,087.75. The bridge was completed ahead of schedule and under budget.

During this time the newspaper was the lifeline for news, community information, and plain old fashioned gossip. Commercial radio stations were just popping up in the early 1920s and radio drama was just starting to come into vogue in the late ’20s and early ’30s. This was before Orson Welles’ famous “War of the Worlds” broadcast. There was no television. The first movie with sound that was actually commercially successful was released in 1927. Long distance calling was in it’s infancy and connecting a call could take up to 23 minutes. The modern media machine and communication we enjoy today didn’t exist.

The construction of the bridge was a popular topic of conversation. As you will see in our coming posts, there were many articles in the newspaper covering topics from the details of the new construction process being used, to the impact that the new bridge would have on operators of ferry services between Louisville and Jeffersonville. The opening of the bridge was a huge event and it was advertised heavily. Merchants in Jeffersonville offered specials and featured their wares in advertisements touting the accomplishments of the construction. Bridge opening parties were all the rage, and Schimff’s even temporarily renamed their ice-cream “bridge cream”: 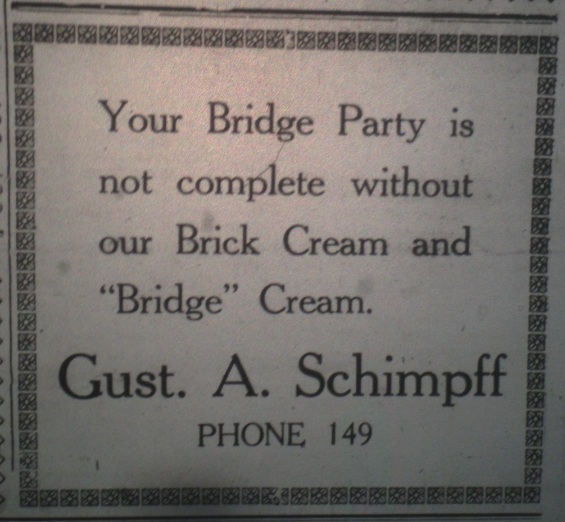 The bridge was a very big deal and the newspaper was one of the primary means of communication used to inform and educate the public about its progress and related activities.